A ten minute film is a tricky length to establish a narrative. It needs good content, it is not enough for it to be just visually spectacular, but it is not enough time to develop a complex narrative or have too many characters. This makes the editing very difficult. There is so much from Jill’s interview that I would love to put in because she had such insight, but I had to be very selective. Also, it is not just a case of selecting the ‘best bits’, the parts selected have to flow smoothly into each other and make sense in the piece overall. Also adjusting sounds takes a lot long than I expected. I used free sounds to get music for the film. I used people tuning instruments, I feel like it is appropriate.

In order to represent the experience of depression while at unive 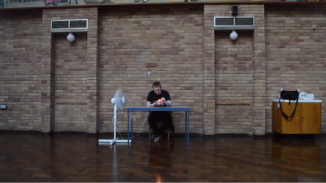 rsity I decided the use of metaphor was important.

In my research I have seen a lot short films about depression. In most of the films to represent depression they use ominous music, black and white affects, and clips of derelict buildings. This makes them look more like horror films that films about mental health. I promised myself I would not use anything in the film to provoke fear or dread. I do not think it shows depression for what it really is. Instead, after a very long time, I settled on two visual metaphors I think are appropriate. Firstly, trying to light all the candles on a birthday cake while a fan slowly turns and blows them out every few moments. Secondly, trying to sort papers in a strong wind. This shows the struggle and frustration and the difficulty of holding on the a goal when there are continuous set backs. I also see these as metaphors of what it is like when depression clouds the mind, it allow no candle of hope to stay lit.

There is a huge responsibility when dealing with mental health. It is not only a politically sensitive topic, but a bad representation of depression could make someone’s condition worse. This must be avoided at all costs. It is hard to represent people with the condition fairly, I can only represent myself. Also if I am in the film I am responsible for who it affects me, but I am not willing to risk people being negatively affected by being in the film, and I don’t feel comfortable forcing the people I know who struggle with it to be in the film. It would be hypocritical to make others speak about it and not talk myself.

I know a few people also struggle with depression and I have spoken to them about what they think about making a film about it. They all think it’s a good idea and they all said they feel good about being involved although I feel uncertain about whether it is fair to ask them to be in the film. I want to focus as well on student support. I think it is brilliant that there is a service like student support there for students. Maybe spreading the message that they are there and want to help will mean more people will go to get help rather than leaving it until it is too much like I did.

I have been thinking about the film a lot recently and my original idea hasn’t been inspiring me. I was lying in bed last night and I realised there was something which I was really interested in and would had real value. I am going to make the film on depression.

Today I went to the seminar. I was scared of being asked questions about how I was doing. Shelley had emailed mike to let him know why I had been absent and that really was the reason I built the confidence to go. As soon as the class began we were called into a circle and asked to explain how our project was going. When it got to me I had nothing to say. I would have lied but I just couldn’t think of a lie because I’d been worrying. So I just said that I had depression and that had just had a really bad episode and was trying to get back on top of my work. I would never have expected that I would ever do something like that. I don’t tell people I know let alone a group of people I barely know. At first it freaked me out but as the day went on I felt better and better about. By the end of the day I couldn’t stop smiling, I felt so liberated by it. It is a moment I won’t forget. I now feel I can do this course and make this film to the best of my ability.

Also in this session I explained to the group what I wanted to make my film about and a girl from the class said she was from the atheist society and would talk to those in it to see if they would like to help me. I will email her as soon as I have a more specific idea of what I’m doing.

Thanks to help from student support I am getting on top of the work I fell behind with but I haven’t fully recovered yet. I am putting the tactics I have learnt into practise and hope it gets better.